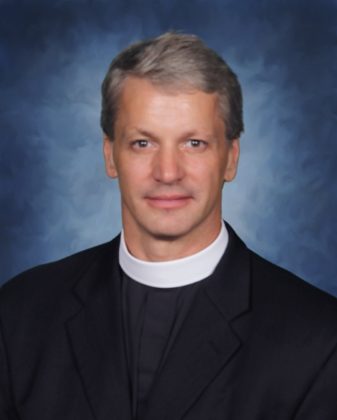 The Rev. John F. Herring is the son of an Episcopal priest. He grew up in northern New Jersey where his father served as Rector at several parishes in the Diocese of Newark. A graduate of Washington College in Chestertown, Maryland, John majored in political science.  After graduation, John worked in several capacities in the business world from human resources to recruiting and sales.

In 2005, John matriculated at the School of Theology at The University of the South, Sewanee, Tennessee, and graduated in 2008 with a Masters of Divinity. He was ordained to the Diaconate in 2007 and to the Priesthood in 2008.  John served as Associate Rector at All Saints’ Episcopal Church in Atlanta for four years, overseeing youth, young adult, and street ministries.  He has been the Rector at St. Peter’s since August 2012.

John has served on several diocesan committees including finance, scholarship, campus ministry, and disciplinary canons; in addition, John served on the board of the Church of the Common Ground, a mission to Atlanta’s homeless.  He currently serves on the diocesan executive committee, and on the board of the William S. Davies Shelter here in Rome, Ga.

John and his wife Keri were married in 2001. They are parents to three children, Amelia, Madeline, and Lucas.  Also in their family is their Australian Shepherd, Dillon, and their two cats, Popoki and Deana.

The Rev. Jorge Ramon Rosa was born in San Juan, Puerto Rico. From an early age he decided to serve the Lord in the Roman Catholic Church. At the age of 17 he decided to enter the Santo Tomas Pontifical Seminary in the Dominican Republic. He graduated in Public Administration. He was ordained a priest in 1983 in the Diocese of Arecibo, Puerto Rico. He performed work in all branches of the government of Puerto Rico as; executive, legislative, judicial, municipal and public branches. In 2009 he became an Episcopalian with his family and since that time has exercised different functions within the Episcopal Church as a volunteer and even in charge of Episcopal missions in Puerto Rico. He was also chief of the chaplains at the Episcopal Hospitals of the San Lucas group in Puerto Rico. In 2010 with his wife Gina, after educating their three children, they decided to adopt two little sisters, Angelee and Sarah from the state of Connecticut. A family that loves nature and pets; Simon, Peter and Bela are a vital part of the family. With a commitment to the poor, Reverend Rosa had the pleasure of inheriting that charisma from his great friend who raised him to love poverty with joy; Mother Teresa of Calcutta.